On the Edge of Your Seat: Chairs for the 21st Century

in conjunction with The Furniture Society annual conference, Craft-Facturing on June 23-25, 2016. 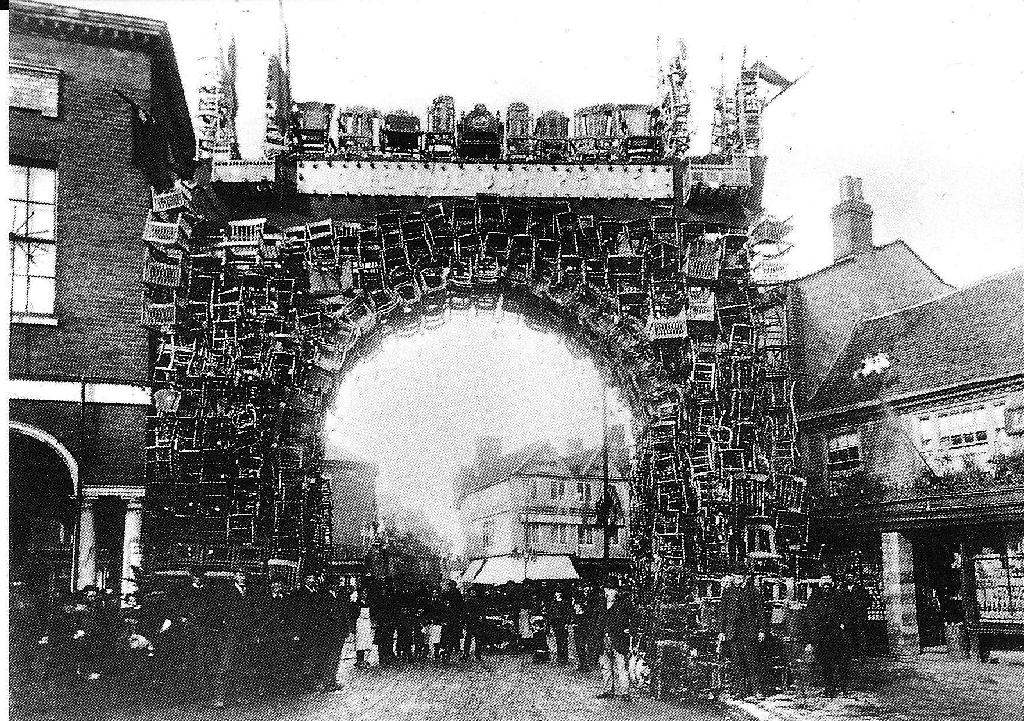 [Photo credit: High Wycombe Arch of Windsor chairs, Bucks Free Press, UK]In May 2016, The Center for Art in Wood, in partnership with The Furniture Society, will mount an exhibition of chairs, benches, and stools for the 21st century. On view will be sculptural, conceptual, functional (and the occasional dysfunctional) seating, reflecting the dramatic evolution from the storied history of chairmaking in Philadelphia. The Center and the Society issued an international call to artists in early 2015 and received a gratifying response – 251 entries from 147 artists.

As Albert LeCoff, co-founder and executive director of the Center, describes it, “The innovative responses to the call for chairs reflects and documents our world in the first quarter of the 21st century. Responses to the call included drawings, models, prints, videos and a chair installation incorporating sound and projected lights.”

A jury of distinguished curators and artists selected 45 works from 39 artists including 7 students. The exhibition, On the Edge of Your Seat: Chairs for the 21st Century, coincides with The Furniture Society’s annual conference in Philadelphia June 23 – 26, 2016.

Philadelphia has been a center of furniture making since before the American Revolution. The “Rising Sun Chair,” made by John Folwell in 1779, was used by George Washington for nearly three months of the Federal Convention’s continuous sessions in Philadelphia1. Accompanying the exhibition will be a richly-illustrated catalog with juror essays and statements by each of the artists on their sources of inspiration and creativity. Setting this new work in context is a comprehensive essay on the evolution of Philadelphia chairs, the makers and their significance in furniture history by Joshua Lane, the Lois F. and Henry S. McNeil Curator of Furniture, Winterthur Museum, Garden & Library.

Jurors for the exhibition included Nora Atkinson, Lloyd Herman Curator of Craft at the Smithsonian American Art Museum Renwick Gallery, Washington, D.C; Jasper Brinton, designer and woodworker, Principal, Brinton Design, Phoenixville, PA; Benjamin Colman, Associate Curator of American Art at the Detroit Institute of Arts; and Susie J. Silbert, Curator of Modern and Contemporary Glass, The Corning Museum of Glass. Reflecting on the submissions for the exhibition, Brinton said, “I think it vital we acknowledge those brave artists who blaze ahead undaunted at times able to work unexpected materials effectively sympathetically discovering effects that are fresh pristine as they stumble across the doorstep of the future.”

A detailed checklist of the 45 artworks and digital images are available upon request.

Insurance: The borrowing institution will be required to insure work on site and provide a Facilities
Report and Certificate of Insurance before the contract is finalized.

Fee: The tentative rental fee of $25,000 provides digital files for object labels, graphic panels, and
narrative text, and shipping to and from your site, and 20 copies of the exhibition catalog. Additional
copies of the catalog will be available to venues at a 40% discount.

For more information about the exhibition please contact Karen Schoenewaldt, Registrar
at karen@museumforartinwood.org