A Sense of Balance: The Sculpture of Stoney Lamar 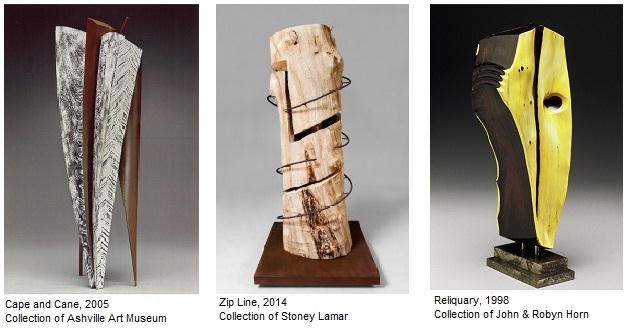 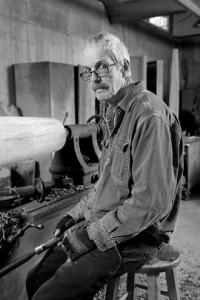 William Stoney Lamar (1951 – ) has contributed exceptional skill and vision to the world of wood turning for over 25 years. Lamar attended the University of North Carolina at Chapel Hill for a short period before leaving and working as a conscientious objector to the Vietnam War for two years. He later attended the University of North Carolina at Asheville followed by Appalachian State University, where he graduated in 1979 with a B.S. in Industrial Arts. It was not until the mid-1980s that Lamar began to work on a lathe and fully explore its utility in realizing his own artistry.

Stoney Lamar’s sculpture is created primarily through a unique approach to multi-axial lathe work, giving his pieces a distinct sense of line and movement unlike other works of turned wood. Often letting the shape, color and modeling of the wood determine a piece’s finished appearance, Lamar also employs paint and metal in his forms. The artist continues to create, and his work can be found in both private and public collections around the country. Lamar has used his knowledge in his field to teach and lecture, and has served on the boards of the American Craft Council, the Center for Craft, Creativity & Design, and of the Southern Highland Craft Guild. He is also a founder of the Association of American Woodturners.

Andrew Glasgow is the retired Executive Director of the American Craft Council. An Alabama native, Mr. Glasgow received an Art History degree from the University of Alabama at Birmingham. After three years as Assistant Curator of Decorative Arts at the Birmingham Museum of Art, Mr. Glasgow joined the Southern Highland Craft Guild in Asheville as the Curator of Education. Four years later, he became the Assistant Director of Blue Spiral 1, a gallery that focuses on the arts and crafts of the South. He returned to the Southern Highland Craft Guild as Director of Programs and Collections before being named Executive Director of The Furniture Society in 2000. IN 2007 Mr. Glasgow was hired as Executive Director of the American Craft Council, then in NYC. He retired due to a long term illness in 2009.

The Penland School of Crafts recently created the Andrew Glasgow Writers’ Residency, which provides time for writers, scholars, and curators to work on topics designed to advance the field of crafts. He lives in Asheville, North Carolina.

Bruce Metcalf is a studio jeweler and writer from the Philadelphia area. He received a B.F.A. from Syracuse University in 1971, and an M.F.A. from Tyler School of Art in 1977. Since then he has taught at Kent State University, the University of the Arts in Philadelphia, and several other schools. He has written extensively about issues in contemporary craft in numerous domestic and foreign publications, and is co-author with Janet Koplos of Makers: A History of American Studio Craft. Metcalf’s jewelry, sculpture and drawings have been included in hundreds of national and international exhibitions in the past 44 years.