Extra-Human: The Art of Michael Ferris 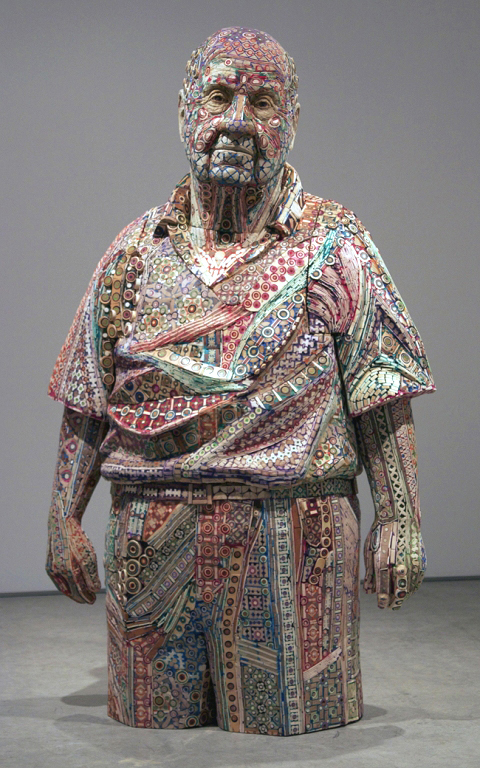 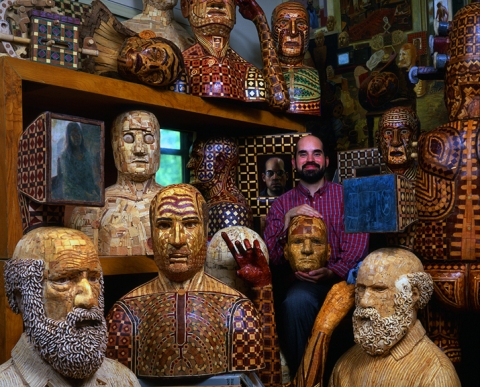 Michael Ferris in his studio. Photo: Courtesy of the artist

The larger-than-life figurative sculptures of Michael Ferris (b. 1969, Chicago) embody a rich fusion of cultural and artistic traditions. Trained as a painter, Ferris embraced sculpture twenty-five years ago and developed an inlay technique inspired by intarsia woodworking from his Middle-Eastern heritage. Ferris’s unique approach to this historical process involves the reclaiming of discarded wood, a method informed by his environmental concerns. He further expands this traditional practice through the use of pigmented grout, which yields a color palette beyond wood’s natural hues. The resulting inlaid patterns evoke Maori tattoos or the elaborate ornamentation of folk art. The exhibition will be an immersive experience that celebrates the heroism of the people who populate our every-day worlds.

Michael Ferris’s work has been exhibited widely throughout the nation at notable institutions including the Elmhurst Art Museum in Illinois; The Bronx Museum in New York; The Queens Museum of Art in New York; ATM Gallery in New York; Katonah Art Museum in New York; de Young Museum in San Francisco, California; and The Illinois State Museums in Illinois. He has received awards from numerous organizations including the New York Foundation for the Arts (2009), The George Sugarman Foundation (2005), and the American Craft Council (2002). Ferris’s work can be found in public collections at the de Young Museum in San Francisco, CA; Illinois State Museum in Springfield, IL; and Crystal Bridges Museum of American Art in Bentonville, AR. His exhibitions have been featured in The New York Times, The New York Daily News, and The Chicago Tribune.

A catalogue will accompany Extra-Human: The Art of Michael Ferris, the first museum solo exhibition of the artist’s career to be presented on the East Coast.

The exhibition program at the Center is generously supported by members of the Cambium Giving Society of the Center for Art in Wood, the Bresler Foundation, Pennsylvania Council on the Arts, William Penn Foundation, and Windgate Foundation. Corporate support is provided by Boomerang, Inc. and Sun-Lite Corporation.